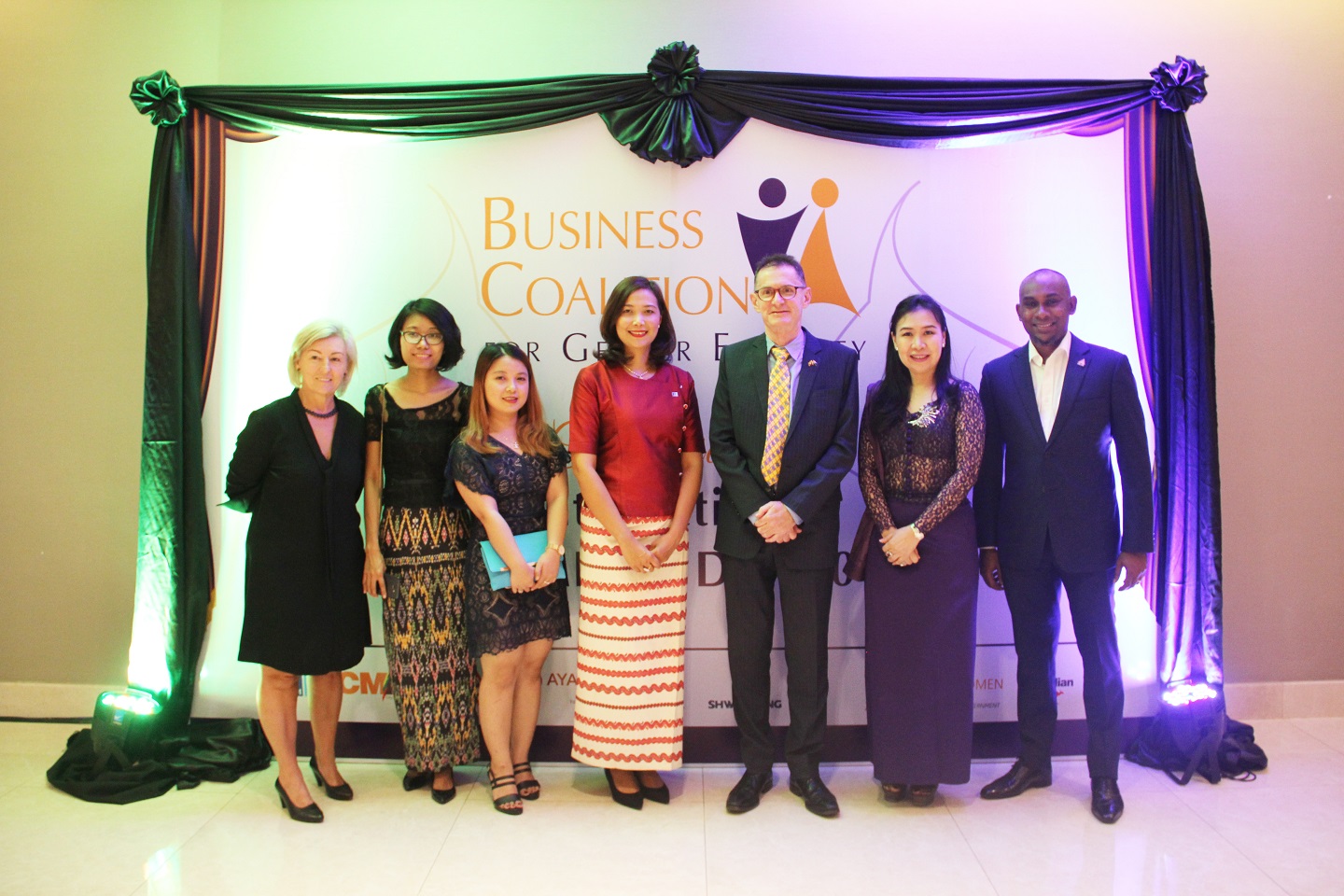 From L to R; Ms. Kathy,Mulville (Investing In Women), Ms. Aye Mon Thu (Shwe Taung Group), Ms, May Zon (Parami Group), Ms. Zarchi Tin (First Myanmar Investment Group), Ambassador Nicolas Coppel, Ms. Khin Ma Ma ( AYA Bank) and Mr. Devanandan Batumala ( KBZ Group) [Yangon, Myanmar, 8 March 2018] — On International Women’s Day, six leading Myanmar companies came together to affirm their commitment to achieving equality in their workplaces.
FMI, City Mart, KBZ Group, Parami Energy, Aya Bank and Shwe Taung Group have formed a new coalition to push for women’s empowerment in the workplace, saying women’s equal economic participation is key to Myanmar’s economy.
As a way of acknowledging International Women’s Day on 8th March, the Business Coalition for Gender Equality (BCGE), in conjunction with the Australia-Myanmar Chamber of Commerce, hosted a cocktail evening which shone the spotlight on workplace gender equality.
The inaugural Chairwomen of the Coalition is Daw Zarchi Tin, Non- Executive Director of Yoma Bank, Director of Strategic Development at First Myanmar Investment Co., Ltd, and a mentor for Myanmar Women’s Mentoring Network.
Daw Zarchi Tin said “Although it could be said that I have enough on my plate, when presented with the opportunity to be involved in this initiative, I accepted because I really believe the issue of gender equality affects all of us – and that business, along with government and civil society, has a key role to play in reducing inequalities, tackling poverty, and achieving the Sustainable Development Goals.
“With good champions, business leaders with passion, the sharing of best practices and working in partnership with government, civil society and many others, I know we will gather momentum and make an impact”.
The Coalition is being formed with the support of the Australian Government’s Investing in Women initiative. Australia’s Ambassador to Myanmar, His Excellency Mr. Nicholas Coppel, attended BCGE’s International Women’s Day event.
“The Australian government has been very supportive of this initiative. The Coalition very much appreciates that, and we look forward to a strong collaboration moving forward,” Daw Zarchi Tin said.
“Forming the Business Coalition for Gender Equality is only the first step,” she said. “We look forward to many more dynamic, forward thinking businesses joining the business coalition and working alongside us to advance gender equality in Myanmar”.